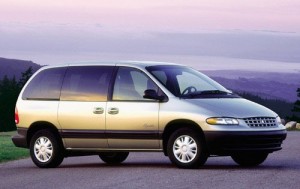 The Plymouth Voyager, also known as the Chrysler Voyager, is one of the fifteen best selling automotive nameplates worldwide. The Voyager was made as a full size van from 1974 to 1983 and was later manufactured as a minivan from 1984 to 2000.

Plymouth Voyager minivans were particularly successful. They were, in fact, the first ever minivans to be constructed and were an instant hit with consumers who wanted a vehicle that was spacious yet not quite as large as a full size van. While these practical, family-friendly vehicles are not the sort that one would expect a celebrity to drive, they have been promoted by Doug Henning, Celine Dion and Tina Turner.

How much does it cost to replace glass on a Plymouth Voyager?

The cost of replacing your Plymouth Voyager's Auto Glass depends on a number of factors, including:

“you all were very helpful and curtise..had already passed on your company to family and friends.”

“When the tech pulled off the windshield there were a couple of rust spots. He told me the best thing would be to fill the holes and he would come back on Monday. This gave me time to make sure the job was done correctly,I dont think many companies would do that and I really appreciated it. KB”

“I was scheduled for a outside repair the following monday, but due to rain and the fact that I wanted my glass fix right away, I call the shop and was informed that they were open. So I responded to the shop and was informed that being that I was early, as soon as a tech arrive they will take care of me. The service they provided, along with there professionalism made it easy for me to deal with my problem. Being that my car was vandalized earlier that morning.”