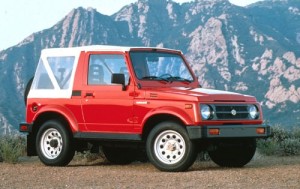 Samurai was the name given to a revamped Suzuki Jimny. The rebranding appears to have been specifically for the American market, as the Samurai was the first Suzuki vehicle to be officially marketed in the United States. In other markets, the same vehicle was still referred to as the Jimny; in Australia, it was known as the Sierra.

The Suzuki Samurai was extremely popular in the United States, despite critics' assertations that the car was unsafe to drive. The Samurai was small yet nimble, could easily be driven off-road and had solid axles and could even be purchased as a convertible. Over 200,000 Samurai models were sold over the course of ten years. What is more, a modified Suzuki Samurai (SJ413) was used in 2007 to set a new record for height reached by a four-wheel vehicle.

How much does it cost to replace glass on a Suzuki Samurai?

The cost of replacing your Suzuki's Auto Glass depends on a number of factors, including:

Get A Quote Now
Comments and Problems