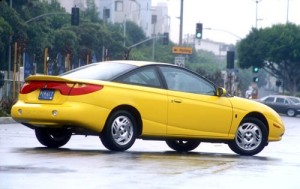 The S-Series was Saturn's first car series and production ran for over ten years (from 1991 to 2002). These cars were vastly different in appearance and function from other General Motor cars. S-Series vehicles had a space-frame design, used plastic side panels rather than metallic ones and were dent-resistant. S-Series Saturn cars are available as sedans, sedan wagons and two door sports coupes.

Saturn made three generations of these cars and over a dozen different models. Additionally, there were limited special editions models such as the SL2 and the SC2. The SCs competed in the SCCA World Challenge in the 1990s and won a number of races while other S-series cars have been driven in rally races. These cars have earned recognition for their speed and endurance and two of them (the SC2 and SC1) rank among Saturn's top ten fastest cars.

How much does it cost to replace glass on a Saturn SL2?

The cost of replacing your Saturn's Auto Glass depends on a number of factors, including:

“Nice job. No problems. I will use them again in the future.”

“Repairman failed to call prior to coming. Just showed up.”

“The work was done in the time schedual without problems.”