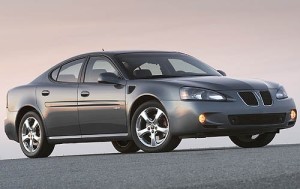 With seven generations under its belt, the Pontiac Grand Prix enjoyed 36 years of production. While the car was, at first, part of Pontiac's full-size lineup, the Grand Prix name was eventually also applied to both mid-size cars and luxury models as well. Though the first generation Grand Prix models were limited to two-door coupes, its fifth generation also saw the introduction of a four-door sedan. In 1988, Grand Prix captured the title of Motor Trend's Car of the Year. The sixth generation of Grand Prix vehicles was awarded a "Good" safety rating by the Insurance Institute for Highway Safety (IIHS) for its results in the frontal impact test.

How much does it cost to replace glass on a Pontiac Grand Prix?

“Your guy did a great job.”

“Compentent. On Time. Quickly done. What more could you want? ”