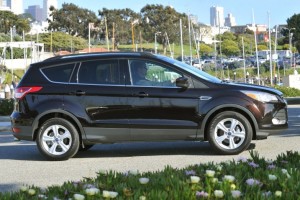 The Ford Escape is a car known around the world. Jointly developed and released with Mazda of Japan, the Escape is also known as the Mercury Mariner and the Mazda Tribute. Smaller than the Ford Explorer, the Escape is one of America's best-selling small crossover SUVs. Its appeal is derived from its practicality: it has the driving and attributes of a midsize car, plus the styling, fold-flat back seats, and four-wheel drive ability of a traditional SUV. This compact crossover was first revealed in 2001 and comes with both rear and four-wheel drive options, as well as two lengths and three trim levels.

Three generations of the Ford Escape have produced a vehicle that is keeping up with the times. A hybrid option has been introduced and safety features have been enhanced. For example, all Ford Escapes come standard with SecuriLock, which has an RFID chip embedded in the key. Without the confirmation signal from the key, the vehicle will not run, even if the key is perfectly cut to match the original. Extras such as these keep theft, injury, and collision losses among the lowest in its class.

How much does it cost to replace glass on a Ford Escape?

The cost of replacing your Ford's Auto Glass depends on a number of factors, including:

“They called Friday and put us off till monday..”

“ fast and efficient service and a job well done”

“Customers Sale and Service was excellent and best in town.The technician named Jason was very polite and cooperative.I am pleased to see windshield glass of my Ford Escape 2008 installed in a befitting manner .I definitely will recommend to others. Zia Chaudhry ”