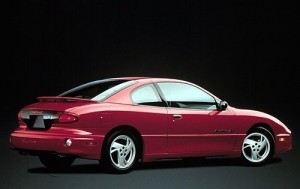 In 1994, Pontiac introduced the Sunbird's replacement, the Sunfire. With the name change, Pontiac also ushered in sweeping changes in its body style. Available as a convertible, coupe or sedan, the Sunbird shares its J-body styling with the Chevrolet Cavalier. The Sunbird was produced for 11 years until 2005. During that time, it underwent two major facelifts in design. In 2000, the plastic cladding that was often seen on Pontiac vehicles of that time period, was added. In 2003, an updated and sleeker look emerged for the Sunbird. Production for this car began to wind down with only the coupe available in the United States from 2003 until 2005. Mexico and Canada continued to see the Sunfire available in its sedan model until production ceased in 2005. GM rolled out the G5 as the Sunfire's replacement in Canada in 2006 and the United States in 2007.

How much does it cost to replace glass on a Pontiac Sunfire?

“Very fast and the customer service was great ! Definitely recommend to anyone!! ”

“Courteous and fast service. Excellent customers service from initial phone call to on site service. I would recommend anyone who needs a glass replacement to give them a call. Price was exactly what was quoted. ”

“He was very kind, professional and did an exceptional job.”

“The service was fast and very reliable”

“I submitted a request for service, and within two hours, I received a phone call. It was unbelievable how quick I got a response. I was very pleased with the promptness of the glass.net process to get a windshield replaced within 24 hours! Great job! Also, I was pleased at the prices glass.net was able to find for its customers. ”