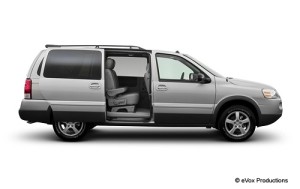 Prior to 1997, the Pontiac Montana was known as the Trans Sport, a minivan. As part of the available trim levels available for its Trans Sport minivan for that year, Pontiac added the "Montana." Due to the immense popularity of the package, the entire line became known as the Pontiac Montana from 1999 forward in the United States, and from 2000 onward in Canada. Until 2005, the Montana had a distinctive minivan look. For that year's production, the Montana was redesigned to resemble an SUV by giving the nose a makeover. This resulted in the hood being less aerodynamic and higher. Due to sluggish sales, Pontiac discontinued the Montana in 2006, though it was still sold in Canada until GM shuttered the Pontiac line in 2009.

How much does it cost to replace glass on a Pontiac Montana?

“A fantastic job very professional and really good work. Will recommend you to all my friends and family. Thanks”

“They got back to me right away after inputting all my info online. Scheduled in a timely manner. The installation was fast and the installer was very friendly and courteous. I'm very happy with the price as well.”