“Its near-instant g-forces can otherwise be achieved only by leaping off a building—literally.” –Consumer Reports

The team here at Glass.net already geeks out over the latest car technologies, but reading that line in the latest Consumer Report about Tesla really got our attention!  Let us fanboy for just a minute here.

How is that even possible, you ask?  Even Consumer Report doesn’t know.  What they do know, is that they had to completely adjust the scoring system.

“In rating it, however, we faced a quandary: The Tesla initially scored 103 in the Consumer Reports’ Ratings system, which by definition doesn’t go past 100. The car set a new benchmark, so we had to make changes to our scoring to account for it.” -Consumer Reports

So what makes Tesla cars so special?  We’re glad you asked!  Here’s a quick guide to what makes Tesla so awesome–of course including their use of acoustic flat-line auto glass throughout the vehicle (but more about that, in just a moment). Step into the magically wondrous world of Tesla Motors.

The first place that allowed Tesla to score higher than any other car before, was its ability to accelerate.  As the quote at the beginning of this article said:

“Its near-instant g-forces can otherwise be achieved only by leaping off a building—literally.”

In other words, it was able to accelerate to 60mph in under 4 seconds.  Oh yeah, and because it’s an electric car, it’s eerily quiet as it pushes the barrier of speed.

How is this possible? We’re glad you asked (keep those questions coming). One reason, according to Tesla’s website:

“Conventional all-wheel drive cars employ complex mechanical linkages to distribute power from a single engine to all four wheels. This sacrifices efficiency in favor of all weather traction. In contrast, each Model S motor is lighter, smaller and more efficient than its rear wheel drive counterpart, providing both improved range and faster acceleration.” – Tesla Motors

Another reason that Tesla cars can accelerate seamlessly and without the roar of an engine, is because the Tesla electric motor has only one moving piece: a rotor.  Conventional gasoline vehicles have an internal combustion engine with hundreds of moving parts. As the name suggests, there is a manner of combustion that must occur, in order for the car to accelerate to a higher speed.  While some may find that sound attractive, Tesla made a very firm decision to keep their premium cars as quiet and smooth as possible.  Plus they have an eye for efficiency. Let’s face it, 1 moving part versus hundreds, is pretty darn efficient.

Which brings us to their superior aerodynamic design.  We were giddy to read about this when the new Model S P85D was announced.

The newest Tesla Model S is engineered with acoustic, flat-line auto glass.  What does this mean? 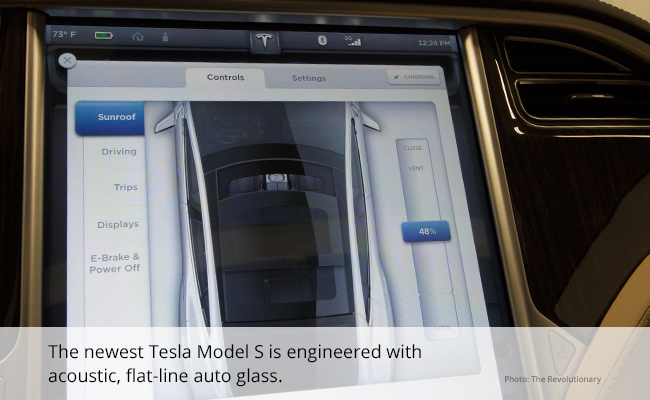 First, the auto glass is made in such a way that it helps to block and deaden outside noise, for a wonderfully peaceful driving experience.

Second, the design of the vehicle was streamlined to eliminate all unnecessary edges and corners–even the small ones around seemingly non-issue spots, like windows and glass roofs.  The modern Model S has a nearly seamless design from frame to glass, which gives it streamlined aerodynamics and significantly reduced drag.

Did we mention that the windshield has rain sensors that automatically turn the windshield wipers on?  Alright, no big deal, lots of newer cars have smart technology like that.  But what about the superior safety feature (and aerodynamic engineering) of a panoramic roof?

Because safety glass is engineered to be hyper-tensile and strong, it’s far safer to have a panoramic roof.  It’s hyper-tensile engineering means it can conform, yet hold its overall shape, to whatever it impacts (like in the event of a roll-over).  Also, safety glass is engineered to hold up to 1.5 times a vehicle’s total weight, plus survive up to 3 consecutive rollovers and protect you from getting crushed.  What better material to make your roof out of?

We’ll talk about Tesla’s perfect safety rating in just a minute. Let’s move onto the question that’s on everyone’s mind–how do I fuel this thing?

Imagine driving a car that gets 87 miles per gallon.  Now imagine that it cost ⅓ for the fuel.  And then imagine it never added to the hole we have in the ozone layer right now.  Mix it altogether, and that’s the second reason that Tesla has the highest scoring car in Consumer Report history.

But wait, there’s more!  While early model Tesla drivers had to be concerned about how far they drove and if there were enough charging stations along the way, Tesla Motors has been hard at work making that a concern of the past.  Since 2014, Tesla has doubled its North American charging stations, and plans to double it yet again in 2016. 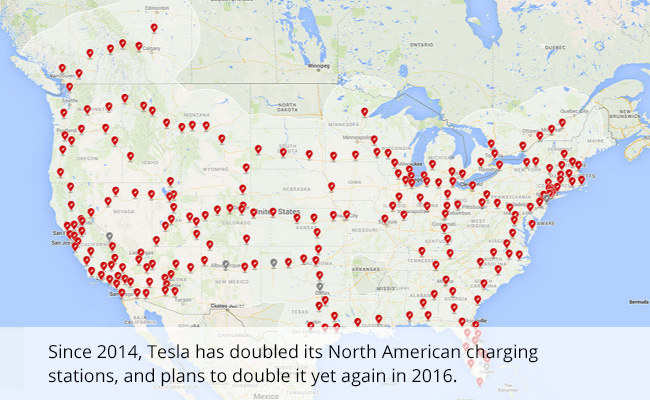 On top of that, as a Model S owner, you can use Tesla Superchargers completely free of cost.  With a supercharger, in just 20 minutes you can replenish half of your battery’s life, or more, and get back on the road.

You could say that other companies have competed for consumer loyalty like Tesla has, with free gas for a year… Except they don’t have almost 3,000 locations nationwide for you to fuel up at (it’s just a dealership or a partner in-state gas provider), and it isn’t for the life of your vehicle.

Thanks to how the Model S is engineered (no big clunky gas engine), it has a lower center of gravity. This makes handling and controlling the car a breeze. But what really won Consumer Report over, was their advanced braking and handling system.

However, that isn’t what excites us the most.  Recently Elon Musk took Bloomberg on a nice test drive, to demonstrate the autopilot system that they’ve been engineering and rolling out in 2015.  As the website describes:

“Autopilot combines a forward looking camera, radar, and 360 degree sonar sensors with real time traffic updates to automatically drive Model S on the open road and in dense stop and go traffic. Changing lanes becomes as simple as a tap of the turn signal. When you arrive at your destination, Model S will both detect a parking spot and automatically park itself. Standard equipment safety features are constantly monitoring stop signs, traffic signals and pedestrians, as well as for unintentional lane changes.” -Tesla Motors

But that just doesn’t do it justice. Take a look at the video for yourself:

As if all of this doesn’t convince you the newest Model S is the best car on the road, there’s still one more point worth mentioning. The National Highway and Traffic Safety Administration has given the Model S a 5-star rating in all categories of it’s crash test.

As Tesla Motors would explain it, this is due to the “unique electric drivetrain that sits beneath the car’s occupant cell in it’s own subframe”.

In laymen’s terms, Tesla is talking about that low center of gravity, again. It has been tested and proven to improve handling and minimize rollover risk.

So what did they do with all the space a heavy gas engine usually occupies?  They placed impact absorbing boron steel rails in it’s place.  If someone gets into a head-on collision with your car, they’re in for a rough time–and you’ll be in much better shape by comparison.

In addition to the aforementioned panoramic roof, which improves the safety of the car all by itself, Tesla also added aluminum pillars that are reinforced with steel rails on the side of the vehicle.  This helps give additional support and stiffness to the roof.

And to think, even with all these rails and pillars added to the vehicle, it’s still lighter and handles better than any other car on the road today.

To add to all the engineered newbies in the sedan, Tesla rounds out its safety standards with 8 airbags, and a battery system that will automatically disconnect the main power source if there is an accident.

As they say on the website, “Should the worst happen, there is no safer car to be in than Model S.”

That, our dear friends, is why the newest Tesla vehicle broke the Consumer Reporting Agency.  Unless conventional cars find a way to significantly diminish the size, noise, and weight of a gas-combustion engine, there is no way it can match all of these driving design and engineering improvements.

However, for those of us who aren’t ready or simply can’t dish out $70,000 – $130,000 on a car (yeah, we cringed with you), we have good news.  Your normal, boring, non-futuristic car is still pretty darn safe.  And of course, one of the primary safety features, is your auto glass.

We won’t harp on about it, because we know you already know. If your glass is damaged beyond the size of a quarter, make sure to use our free auto glass replacement quote comparison tool. It can save you time, and possibly your life.

And then rest peacefully at night, and dream of driving a Model S. We’re right there with you.